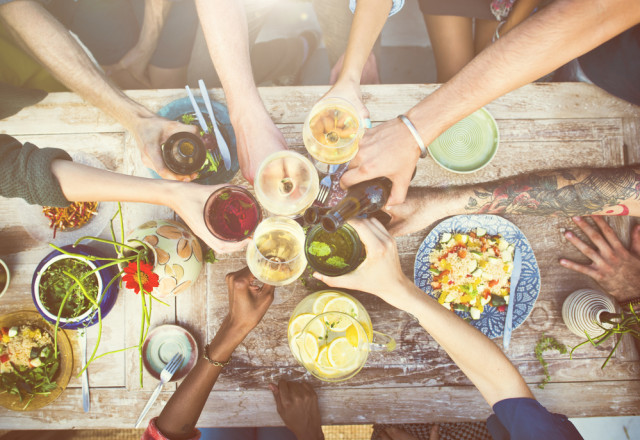 Have you ever wondered how the Italian aperitivo came about? This Italian “happy hour” was certainly not invented by a barman or a even a chef. The next time you’re having a glass of wine and enjoying some delicious finger food before dinner, know that this Friday night ritual is much older than you think – in fact the aperitivo has ancient origins.

According to some, the very first “aperitivus” was actually a beverage used to “open the stomach” and stimulate appetite. This concoction was invented by none other than Hippocrates, the famous ancient Greek physician. He suggested the vinum hippocraticum as a remedy for patients who complained of lack of appetite. This drink was a sweet and spicy white wine made of burning bush, wormwood and rue. Ancient Romans then turned this drink into gvinum absinthiatum which improved the flavor of this drink thanks to the addition of rosemary and sage. This drink of our ancestors seems to have stuck as we still have wine at happy hour!

During the Middle Ages, herbal remedies were common in pharmacology and were very much used in monasteries. It was discovered that bitter substances stimulated hunger as the bitterness produced mucous and saliva enzymes which are provoke hunger. The 18th century saw the beginnings of the aperitivo as we know it today. These concoctions became less medicinal and more social thanks to the invention of Vermouth in Antonio Benedetto Carpano’s workshop. This flavored wine was served and sold in elegant bottles.

Little did Carpano know that Vermouth would become so famous just a few decades later thanks to Italy’s King Vittorio Emanuele II. He liked vermouth so much that it became the official court aperitif!

The aperitivo scene moved its way to Milan in the early 19th century when a pharmacist named Ausano Ramazzotti began studying the vermouth from Piedmont. Ramazzotti created a bitter that sold like hot cakes at his bar he opened just near the La Scala Opera House. This bitter is now a household name to Italians now.

From that moment onwards, Milan and Turin became the aperitivo capitals of Italy and both rigorously competed each other during mid-19th century. Thanks to this healthy competition, we now have drinks such as Marini and Campari, not to mention tasty snacks. And this is how the Italian aperitivo slowly made its way across Italy and even around the world!