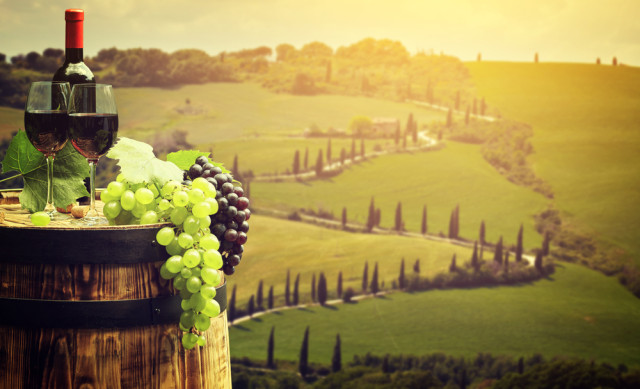 When you talk about wine in Tuscany, one of the first things that comes to mind is Sangiovese. It is a grape variety which can be found from the Chiana Valley to Chianti Classico. A red berry that is distinguished by silky tannins with an impressive character and solid texture, Sangiovese is usually known for its earthy aromas, currant, cherry and hints of undergrowth, plums and even tobacco. In order to talk about the complexity of the Sangiovese grape, it is necessary to talk about the history of the territory where it is grown – Tuscany. This is a land which has produced some of the best wines in the world – Chianti Classico, Nobile di Montepulciano, Brunello di Montalcino.

Sangiovese is the king of grapes, but you cannot talk about Tuscan grapes without talking about other Tuscan grape varieties that are native to the territory. Cabernet Sauvignon is a red berry from France in the Médoc region and south of Bordeaux. This vine can be found along the gentle slopes of central Italy, considered its second home thanks to Italy’s climate which is not too cold in the winter and not too hot in the summer, as well as for its soil which is clayey and stony.

Comparing these two grape varieties is like telling the story of two old souls of a great viticulture that come from the heart of the “belpaese”. Both of these grapes are diffused around the whole world, along the routes leading us to the Far East or to the United States, Canada and South America. Drinking a glass of Sangiovese-based wine promised scents of cherry, violet, fruits, red flowers and the woods of Tuscany. Drinking a Sangiovese-based wine means immersing the palate with tastes of tobacco and coffee, vanilla and nuts. And if you taste a great reserve wine, you can expect a slim and elegant tannin, never excessive or intrusive. The great wines of Italy come from this little purple berry that grows lush on the hills of Chianti and Maremma, Val di Chiana and Val d’Orcia.

These two great vines are produced in similar areas and combine all the peculiarities that distinguish them to make them as unique as possible. Though the two are quite similar, you can distinguish them in a few ways. Cabernet Sauvignon is fuller and darker, and the Sangiovese has more brilliant tones to it. From an olfactory perspective, the Cabernet Sauvignon has notes of green pepper and like many Super Tuscan wines, has notes of red and dark cherry just as the Sangiovese. Comparing these two wines can be a true experience of the palate!